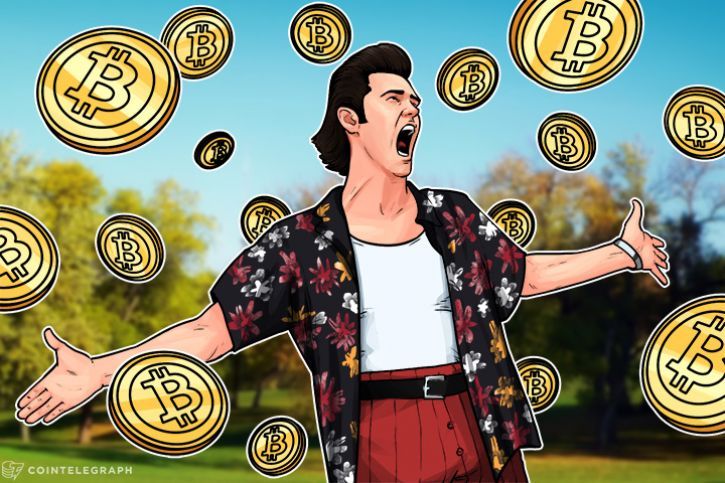 have urged Bitcoin holders not to sell, as even mainstream news consumers stay bullish on its future. In a tweet over the weekend, Dotcom, who is now fully signed up to Bitcoin to power his latest creation, reiterated the lucrative nature of ‘hodling’ funds.

His comments came a day before WikiLeaks founder Julian Assange revealed he had turned 50,000 percent profits from Bitcoin funding of his resource, as a direct result of the US government blocking credit card payments. Assange, also using Twitter, wryly expressed his “deepest thanks to the US government,” which made the decision back in 2010 when a single Bitcoin was worth less than $0.10.

While vocal proponents of Bitcoin’s long-term investment prospects are becoming increasingly well-known, a survey by CNBC meanwhile suggests more and more mainstream consumers are beginning to share their positivity. Reporting on Assange, the publication asked users to choose a likely future Bitcoin price, without specifying a timeframe. Out of three options – over $10,000, $6-8,000 and “Jamie Dimon is correct” – the majority of the roughly 5000 respondents chose the first, reflecting optimism as Bitcoin continues to circle all-time highs around $5,700 Monday.

IBM Blockchain Payments To Use Stellar In Major Partnership Deal

KlickEx have announced Stellar as the backbone of its new “cross-border payments solution.” In what it describes as the first use of public Blockchain technology “being used in production to facilitate cross-border payments in multiple integrated currency corridors,” IBM is already convening a group of big banking partners to further the initiative. “Currently, cross-border payments take up to several days to clear,” Stellar co-founder Jed McCaleb said in

“This new implementation is poised to affect a profound change in the South Pacific region, and once fully scaled by IBM and its banking partners, could potentially change the way money is moved around the world.”Multi-asset, real-time and cross-border: Payments solution from IBM #blockchain at #Sibos. Panel, demos and booth

KlickEx already has an extant payments network operating in Southeast Asia from its base in New Zealand. Now, a group of “diverse banking leaders” will assist in the”development and deployment process” of the Blockchain-backed solution, which is already in active use, IBM states. The move sees a significant implementation for Stellar within the global financial framework of legacy institutions, putting it alongside Ripple as one of the principal entities in Blockchain-based institutional settlements.This caps a year of outreach initiatives, with marketing ploys such as a grants program and the release of the Lightyear spin-off hoping to attract wider attention and participation from investors.