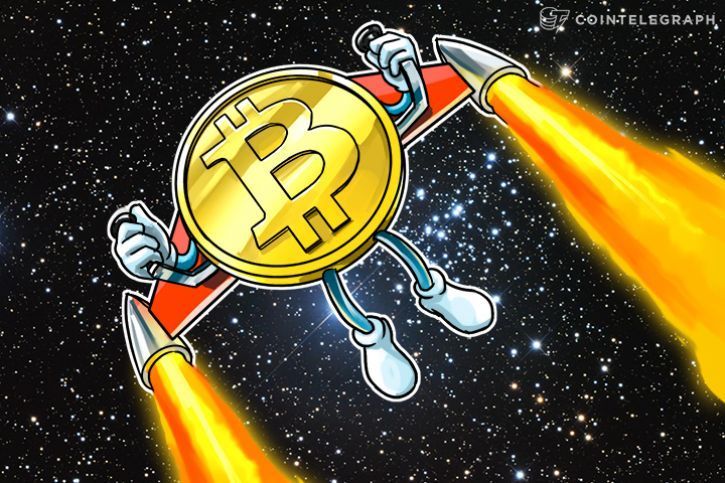 one major psychological hurdle after another. At 11:00 UTC today, the world's largest cryptocurrency by market value reached a new lifetime high of $15,058, according to CoinDesk's Bitcoin Price Index (BPI). In the last 24 hours, bitcoin (BTC) has appreciated by more than $2,000. As per CoinMarketCap, gains are close to 19 percent over the same period. Prices have since dropped back slightly and stand at $14,562 at press time

The primary theory about the astonishing rally being put forward by investors on social media is that bitcoin is pricing in the entry of big institutional money via the introduction of the first BTC futures products. Both CBOE Global Markets and CME Group are set to launch the new futures contracts on Dec. 10 and Dec. 17, respectively. With the notable shift in the industry, bitcoin may remain well bid at least until Sunday's listing of BTC futures on the CBOE. That said, the technical chart studies show BTC could face immediate resistance at around $16,194.

Bitcoin could easily extend the rally to $16,194 levels in the next few hours. But, while the investor community is mostly happy to see the cryptocurrency heading for the moon, as indicated by comments on social media, there is growing discomfort with the pace of the ascent. Still, today, the recipe for a notable technical correction is absent. History shows that bitcoin usually suffers big sell-offs following confirmation of a bearish RSI divergence. Yet, the charts show no such development so far. In the past, bitcoin has suffered pullbacks when the RSI and stochastic turned lower from the overbought territory (see circles on chart). Currently, both indicators show overbought conditions, yet are still rising.

Look at these Stats.