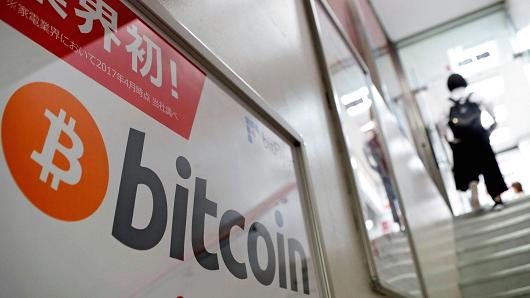 A logo of Bitcoin is seen on an advertisement
of an electronic shop in Tokyo, Japan September 5, 2017.The cryptocurrency market has had a banner year thanks to the meteoric rise in bitcoin prices and the huge popularity of initial coin offerings as a new way of fundraising.Many people are buying into new digital tokens with the assumption that those virtual currencies will appreciate over time at levels similar to bitcoin, or its rival ether. And while price action has hardly been staid this year, market watchers told CNBC they expect more dramatic movements in the cryptocurrency market in 2018.Those developments could include a spike in funds being raised through ICOs, clearer guidelines and crackdowns from regulators and the mainstream acceptance of bitcoin, they said.

Companies, mostly start-ups, have raised at least $3 billion by issuing new digital tokens in 2017, resulting in more than 1,000 virtual currencies in existence today.Commentators are largely predicting that companies will raise even more funds through digital token sales next year — only this time, bigger, more established companies could get in on the action."We are going to see the first of the real legit, large ICOs of existing established companies that are suddenly raising half a billion, or maybe even 5 billion (in funds)," Julian Hosp, co-founder and president of Singapore-based start-up TenX, told CNBC. That company, which has a wallet application and fiat-denominated card for the use of cryptocurrencies in "real life," raised $80 million in a token sale

"We are going to see the first sale of equity (through an ICO) and that's … going to be a big, big, big slap in the face to many large investment banks."

Hosp explained that large firms would bank on their established credibility to potentially raise even larger sums than what small start-ups with unproven business concepts are raising today. Some, he said, could even start offering investors an equity stake as part of their digital token sales.

At the moment, participants in an ICO usually send either bitcoin or rival token ether to back a blockchain-based project. In exchange, they receive an entirely new virtual "coin" that has some sort of assigned worth and can be used to redeem a service offered by the company. Theoretically, companies can also give investors an equity stake — similar to an initial public offering — but most don't to avoid being subjected to stringent securities regulations.

But all of that could change next year, according to Hosp. "We are going to see the first sale of equity (through an ICO) and that's … going to be a big, big, big slap in the face to many large investment banks," he said. One of the ways that investment banks make money is by helping companies structure their securities before they are sold to investors.

The dramatic rise of digital token offerings saw the creation of hundreds of new virtual currencies, but experts say most of them have little to no value and some are outright examples of fraud. That's due to the relative ease in conducting a token offering and the few regulatory checks. Hosp said he expects the cryptocurrency market to consolidate next year: "We are going to see the weaving out of a lot of cryptocurrencies in 2018," he said, adding, "People that are gambling on worthless companies, they are going to lose massively."

Digital token sales have, indeed, taken a bit of hit in recent months. Industry analytics firm TokenData said November was set to be the slowest month for ICOs since August, and many of the token sales did not even reach their target. There have also been instances of fraudulent tokens being issued and the theft of millions of dollars' worth of cryptocurrencies. That led to many in the industry distancing themselves from the hottest new way of fundraising.

I've been saying through this past year that ICOs are toxic and that a lot of investors are going to get burned — badly!" Brad Garlinghouse, CEO of Ripple, which runs the fifth-largest cryptocurrency by market value, told CNBC by email. Garlinghouse added that he expects to see lawsuits, fines and "even jail time" for perceived bad actors in the cryptocurrency space. That all could cause short-term volatility for the whole space, he said. Still, many in the industry maintain there are benefits to conducting an ICO, including the ability to raise funds without giving away equity.

Short of the odd ban on the creation of new virtual currencies, regulators have largely struggled to keep up with the rapid pace of the ICO market. Ripple's Garlinghouse said he expects authorities to clamp down on fraudulent players in the space. Others said they expect clearer guidance, and eventual enforcement actions, from regulators like the U.S. Securities and Exchange Commission. "I think certainly more clarity will come about through enforcement actions and other guidance that the SEC will give in the tokenized marketplace," Stephen Obie, partner at international law firm Jones Day, told CNBC. He pointed to a report the SEC issued earlier this year that indicated the regulator "knows about this market (and) takes it seriously."

Regulators could also clamp down on so-called ICO advisors and those advising investors to buy cryptocurrencies, according to Obie. He explained that, at least in the U.S., various regulations apply to different types of advisors. "This is going to open up a series of enforcement actions for those that think they can advise in this space and not participate in the regulations," Obie said. At the same time, efforts from regulators in the cryptocurrency space need to be international, according to Tim Phillipps, Asia Pacific financial crime network leader at consultancy firm Deloitte. He told CNBC that investors will need international laws to give investors some piece of mind that their assets will not disappear.

"Only then can we really see healthy growth in this space," he said. Garlinghouse added, "For blockchain and digital assets to realize their potential, it's critical we in the industry work with regulators, not in the shadows." He said that he expects the total value of digital asset market to surpass $1 trillion in 2018 — currently, bitcoin's market capitalization is about $300 billion.

Bitcoin started the year at about $968 and recently saw a more than 1,600 percent jump to top $16,700 per token as of Dec. 7 (although at least one exchange has seen the price exceed $19,000). Ronnie Moas, founder and director of Standpoint Research, said he expects bitcoin's price to jump to $20,000 by next year from his initial target of $14,000. He told CNBC that a majority of the people in the world have yet to get in on the bitcoin trade. Since the cryptocurrency has a fixed number of possible tokens, Moas said more entrants into the space will push up the prices because of the constricted supply. The outlook is "very comforting to the bulls here, and to the people who are invested" in bitcoin, he said.

He also predicted that the cryptocurrency will go mainstream in 2018 and become part of "strategic reserves" and "asset allocation models" around the world. More consumers will also likely pay for goods and services with bitcoin, he predicted. Jones Day's Obie agreed that bitcoin will become more mainstream and an entirely new asset class may emerge in the investor community. He referred to the string of announcements from the Chicago Board Options Exchange, Chicago Mercantile Exchange and Nasdaq to offer bitcoin futures contracts. "I think you're seeing mainstream regulated exchanges looking at whether bitcoin, and other cryptocurrencies, are asset classes in and of themselves," said Obie. "Clearly there are people that would like exposure to this."

In July, the U.S. Commodity Futures Trading Commission, which regulates the futures and option markets, approved a swap execution facility for cryptocurrencies. Meanwhile, investors are also waiting to see if the SEC will eventually approve the creation of a bitcoin ETF. The existence of bitcoin futures contracts could increase confidence for the regulator to give its approval, Obie said. "Having a futures market with price discovery will enable the SEC to get comfortable that there is a regulated market, where pricing is showing," he said. "I think you're seeing the development of a fourth asset class."