2018:
The Year of the Cryptocurrency Craze 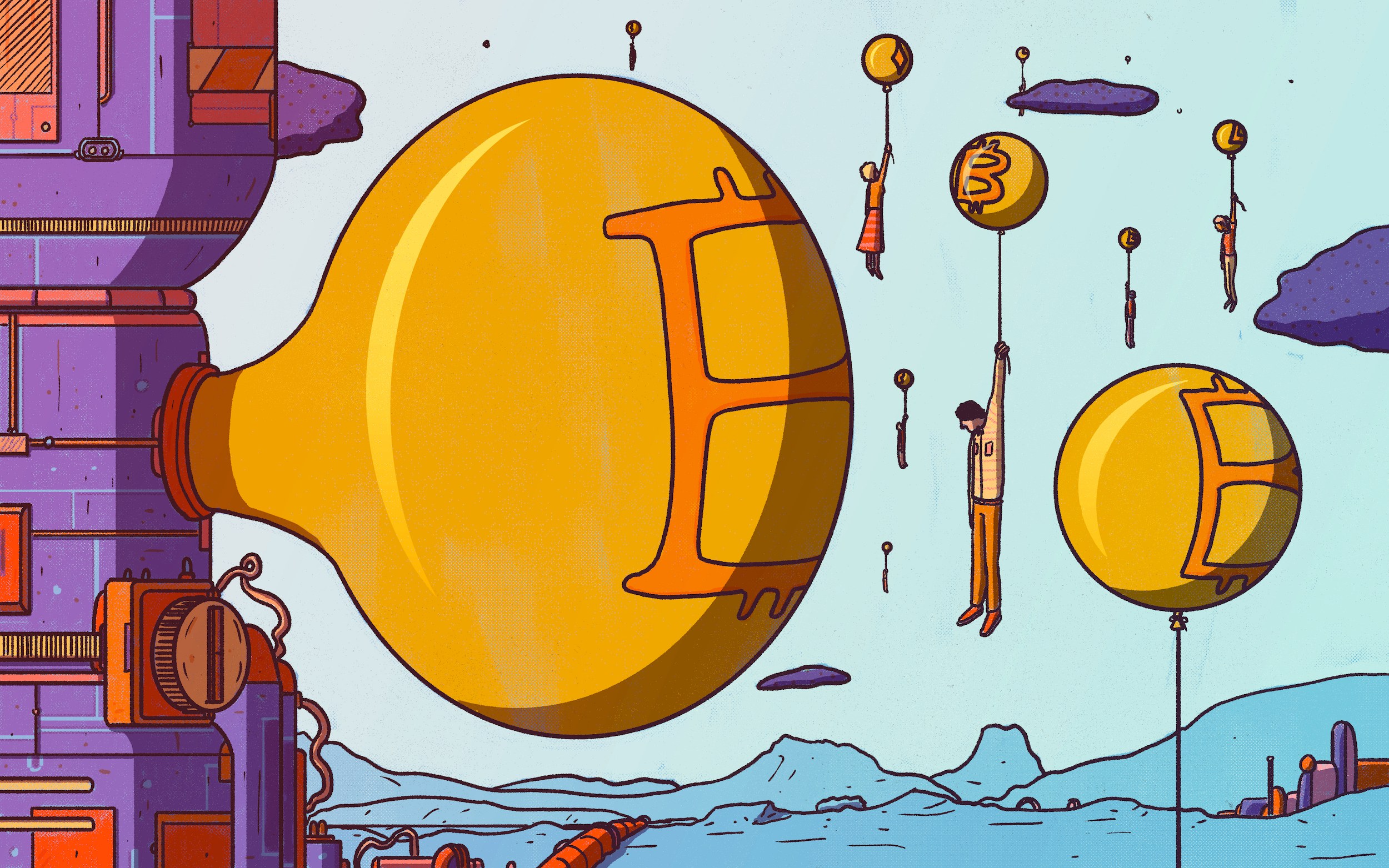 undergoes a Cambrian Era-style explosion of growth in which we try to use it for everything. Email, search, social networking—each passed through its “this will solve all our problems!” phase before we figured out what its best applications and limitations were. With the Bitcoin bubble testing astronomical prices every day, cryptocurrencies and the blockchain technology that drives them are now taking their turn in this one-tech-fits-all role. A blockchain is a cryptographically protected distributed ledger—it’s what protects you or anyone else from making a copy of that Bitcoin you just bought. You’ve probably heard about the popularity of blockchain tech in the financial business.

In fact, anything that you can make a list of, you can manage with blockchains. Ambitious developers and entrepreneurs are aiming to use them to rework everything from how we track land ownership to how we distribute medicine and how we grant diplomas. Some of these ideas are brilliant, while others are ridiculous. Do we really need a blockchain to run an online encyclopedia or pay for news? Whether we do or not, in 2018, we’re probably going to see it tried. That’s partly because of a glut of venture capital and the salivation of investors thrilled by Bitcoin’s wild ride. But it’s also because this is the exuberant but wasteful process by which the tech industry determines what each new platform is actually good for. And it’s a process that will play out whether the Bitcoin bubble keeps soaring or finally pops.

In the coming year, the motto of financial-tech developers is going to be “cryptocoins for everything!” Initial Coin Offerings (ICOs), which introduce new cryptocurrencies to the world, have raised $4 billion so far, mostly in the last year—and that has turned them into a craze of their own. A future in which each of us has our own personal currency remains improbable. But one in which each big tech platform issues a token as the coin of its realm is probably not far off. Before that can happen, here are three issues that the industry will need to resolve: Are ICO tokens primarily investments, or tools? Can we give up the idea that cryptocurrencies are a new species of traditional cash? And can developers end the plague of technical problems surrounding Bitcoin and every other cryptocoin? The continued rise of cryptocurrencies in 2018 will depend on how much progress the crypto world can make on these questions.

What Is a Token?

Initial Coin Offerings (ICOs) started out as an alternative means for funding new protocols and infrastructure in the crypto universe. Through this process, companies create and sell tokens; the tokens can be hoarded as investments, or used to accomplish tasks on their platform. Some projects, hoping to reassure skeptics and qualify for more institutional capital, explicitly model their cryptocoin projects on traditional investment vehicles. The startup incubator Science, for instance, raised $12 million in an ICO aimed at taking advantage of ICO-mania to kickstart a whole venture fund’s worth of investments in blockchain-related companies. Science structured its ICO to meet Securities and Exchange Commission rules, and buying into the Science ICO was not that different from buying into any other seed investment round.

The Smartest Move on the part of Companies making ICOS and Bitcoin-Related products will be to wean the Public and the media off the "Digital Cash: Concept.

Others take a more complex view of the role of tokens: Sure, they can fluctuate in value and serve as investments, but we’re creating them because they have a job to perform in making a new technology work. Engineers building new protocols and platforms don’t just take the cash raised in the ICO; the tokens they sell also create incentives and perform basic functions in the systems they’re building, so the tokens won’t just sit in investment accounts. That’s the approach that lay behind the recent $50 million ICO by Blockstack, a startup that envisions a decentralized, blockchain-based web in which your direct interactions with businesses, organizations, and other individuals are powered by its tokens. Blockstack’s system uses its own browser and plans prototype apps from independent developers for data storage, Airbnb-style home rental, music publishing, and personal health records.

Right now, the ICO world happily embraces both these models. A year from now, we should have more evidence to show which one makes more sense. The investment model offers more assurance that any particular ICO won’t be an outright scam; the “put tokens to work” approach opens up more revolutionary technical possibilities.

The Future is Cash-Free

Bitcoin was first explained to the public as a form of digital money, and that is how its successors and competitors—like Litecoin, Filecoin, and Ether—have been framed as well. Each of these “currencies” resembles traditional money in certain ways—they’re abstractions of economic value; they can be traded; they each use unique symbols. But none of them is suited to playing the most basic role of currency, as a relatively stable medium of exchange—that is, as a simple way to buy and sell stuff. There’s too much friction involved. Each transaction takes too long, uses too much energy, and involves too many risks. (Bitcoin, for instance, is shockingly easy to lose—one misplaced password and you’re in trouble.)

Nearly a year ago—back when Bitcoin was trading for a mere $1000 and people rolled their eyes!—Cade Metz was arguing in Wired that “Bitcoin will never be a currency.” But that idea isn’t dying gently. Here, for instance, is the latest sad tale of a Bitcoin owner who tried to sell some of his holding and found himself in a labyrinth of trouble. As he lamented on Twitter, “It’s still either super complex to use, either woefully insecure and/or unsafe. but now you also have ridiculous high fees, long confirmation times, super impractical exchanges with zero .” (His Twitter ID says he’s a Google engineer, so he’s likely neither a rube nor a technophobe.) In 2018, the smartest move on the part of companies making ICOs and Bitcoin-related products will be to wean the public and the media off the “digital cash” concept. It’s a metaphor that no longer makes sense, and it’s getting in the way of our properly understanding a new technology that’s looks like money but really isn’t.

Still Working Out the Bugs

The biggest problems with Bitcoin have emerged because the mechanics of buying and holding bitcoins are so inscrutable that nearly everyone pays third parties to handle them. Those wallet-service middlemen become points of failure for the whole system. They get hacked; their systems go down; they get ordered by governments and regulators to report transactions that users thought would be anonymous. In 2018 you can expect to see an escalating competition among providers of these wallet services to earn users’ trust. It won’t be easy, since the inflation in Bitcoin’s price has driven a frenzy of participation that strains these companies’ capacities. But if the Bitcoin world doesn’t solve this problem, it will sour the entire industry’s prospects, as it crops up for each new coin or token that catches fire.

Each of these three challenges that cryptocurrencies face comes down to a question of trust. Ironically, the libertarian dreamers who conceived of Bitcoin and its brethren imagined a world of “trustlessness,” in which you didn’t have to assess the reputation of the counterparty in any transaction, or any middleman institution, because the whole process was guaranteed by the blockchain’s irrefutable, crypto-secured record. But nothing that’s happening in the world of ICOs and Bitcoin today has moved us any closer to such a trustless state. People are still making gut-driven bets based on faith: Is my wallet company the most reliable? Which token is most likely to last and appreciate? Which developers are moving in the smartest direction?

Those bets will continue as long as the market keeps rising. The cryptocurrency boom has been built on abundance—both in capital (because interest rates have been so low for so long) and in technical resources (because there were lots of idle CPUs before the cryptocurrency frenzy commenced). As BitTorrent inventor Bram Cohen says, “Bitcoin does a very good job of wasting every available resource it can get its hands on.” The technical resources have begun to dwindle, which is why gamers have to pay more for their graphic cards—the Bitcoin miners have bought up all the hardware. The slightest whiff of a financial crisis will tighten the available financial resources, too. The real test for cryptocurrencies, next year and beyond, will be whether they can evolve to be more efficient. Remember: The Cambrian Era ended in mass extinction.