Qtum Bridging Gap Between
East and West With BlockShow Asia 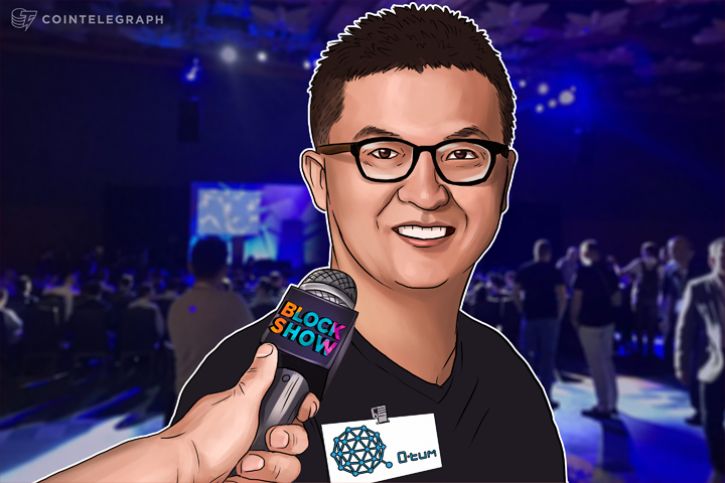 Cointelegraph continues updating you about the companies

that made significant input to the recent BlockShow Asia conference in Singapore. This time we will discover a company called Qtum and speak with the CEO Patrick Dai. Qtum joined BlockShow Asia because they hope that they can enlighten people with the value of their technology and they know if they want to do that they need to support the industry. Qtum is claimed to be a Blockchain project that bridges the gap between Bitcoin, Ethereum and the other parts of the whole

“Combining East and West, the advantages of several projects with our own innovations it’s what makes our team and our technology so great.”

Qtum is an open source Blockchain project that is developed by the Singapore-based Qtum Foundation. Qtum is a hybrid Blockchain application platform. Qtum’s core technology combines a fork of Bitcoin core, an Account Abstraction Layer allowing for multiple Virtual Machines including the Ethereum Virtual Machine (EVM) and Proof-of-Stake consensus aimed at

“We believe this will allow Smart Contracts and Decentralized Applications to run on a familiar foundation while offering a robust environment for developers.”

Patrick Dai joined the Blockchain project in 2012. He was the first of 50 people in China who knew anything about Bitcoin. In 2015, he wanted to create something new to help the industry- that was the birth of Qtum. Patrick stated at

“The whole cryptocurrency is a small circle we need to work together, we need a union so that’s the reason we built Qtum.”

From the open source software evolution he believed he should make something more edgy, reinvent the wheel. Qtum uses Bitcoin and proof of stake as a consensus. Patrick wanted Qtum to become a layered design. They have a decentralized governance protocol where everyone can make a decision if you are a coin holder. Most of Blockchain is based on the proof of work- Satoshi’s original decision – but now the idea is changing the Blockchain is becoming more centralized.

“I believe that proof of stake is the new trend, that is a part of the reason why Qtum from the very beginning is using proof of stake. Also, I think right now the usability is a disaster for a lot of people, its super hard to manage your private key, to manage your money. Right now for the smart contract we are using Solidity, but Solidity is a new development language, we do not have too many developers who are masters in Solidity.”

Part of Qtum’s appeal to IoT comes from our proof-of-stake design, Qtum’s ability to execute smart contracts from light clients, and their lightning network and x86 virtual machine which are in the works. At BlockShow Asia Patrick explained how the IoT industry’s little regulation allows it to innovate faster, especially when it comes to Blockchain technology. Devices and things can be given identities and accounts to interact machine-to-machine in ways never before possible.

At BlockShow Asia 2017, Qtum was not only one of the main sponsors, but also participated in the event as an exhibitor. That’s how the Qtum team explains the company’s main goal in being part of

“Since our industry changes so rapidly, we need to be aware of all the innovations coming onto the scene. I think engaging with the community, seeing how sentiment changes, and what technologies have made recent breakthroughs is important for Qtum to stay up-to-date”.

According to John Scianna, Marketing Director at Qtum, the audience which came to visit the company’s booth during the conference was quite diverse: “It ranged from people just hearing about Blockchain to Qtum fans.” Moreover, Qtum CEO Patrick Dai performed as a speaker on the first day of the conference, speaking about the future of Blockchain and IoT, which he believes is one of the most promising sectors to be empowered with Blockchain technology.

“We believe that Blockchain IoT applications will really take off in this coming year. Blockchain technology offers a number of advantages to this industry. Currently, there’s several competing communication technologies for IoT devices, but if we can develop a framework and some standards, we can make some advancements.”

Qtum is building the bridge between the Blockchain and traditional worlds. For far too long, the industry has been limited by the amount of developers that could be trained to learn Solidity. They will have an x86 VM prototype running on the test network in early 2018 along with a whole range of wallets and developer tools that will increase the accessibility and utility of the network. Qtum is highly ambitious on Qtum’s x86 VM accessibility: “With Qtum’s x86 VM we will help give access to the millions of developers that know traditional programming languages like C, C++, Rust, Haskell, etc. so that they can become dapp developers.”

In addition, Qtum just released their latest Qt wallet, which allows people to interact with smart contracts and QRC20 tokens. This is a significant milestone for the Qtum community since now they can unleash the full potential of their dapps. Stay tuned and excited about their release of an updated roadmap with even more details coming shortly! Make sure to stay up to date with Cointelegraph! We will be making updates of interviews and influential insights learned from BlockShow Asia. You can enjoy more BlockShow-related materials at our official Social Media channels and make sure to stay tuned for some fresh announcements which are coming up soon.