No, bitcoin isn't likely to consume all the world’s energy in 2020 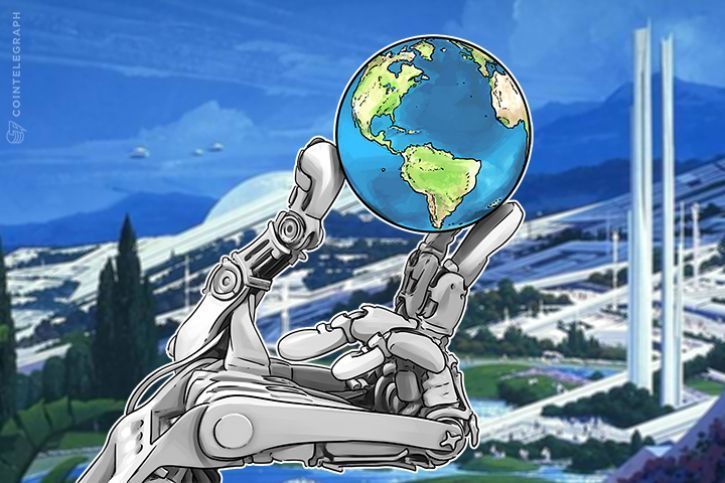 A technician inspects bitcoin mining machines
at a mining facility operated by Bitmain Technologies Ltd. in Ordos, Inner Mongolia, China,Here are a few things you might not know about bitcoin, the cryptocurrency that has captivated the financial world after skyrocketing about 2,000 percent in a year to more than $19,000 per coin.The computer process that generates each coin is said to be on pace to require more energy than the United States consumes in a year. This bitcoin "mining" allegedly consumes more power than most countries use each year, and its electricity usage is roughly equivalent to Bulgaria's consumption.

But here's another thing you might want to know: All of that analysis is based on a single estimate of bitcoin's power consumption that is highly questionable, according to some some long-time energy and IT researchers. Despite their skepticism, this power-consumption estimate has quickly been accepted as gospel by many journalists, research analysts and even

"Companies who make big investment decisions based on numbers that are highly uncertain are almost always going to get burned. It's just a mistake to jump to conclusions." -Jonathan Koomey, lecturer in Earth Systems, School of Earth, Energy, & Environmental Sciences, Stanford University

That model is also the basis for forecasts of bitcoin's future energy use that remind some experts of wild projections about Internet data traffic in the mid-1990s that contributed back then to companies spending far too much for capacity they would eventually not need. "Doing these wild extrapolations can have real world consequences," said Jonathan Koomey, a Stanford University lecturer who pioneered studies of electricity usage from IT equipment and helped debunk faulty forecasts in the 1990s. "I would not bet anything on the Bitcoin thing driving total electricity demand. It is a tiny, tiny part of all data center electricity use."

There is no doubt that bitcoin has an energy efficiency problem. New units of digital currency are created by solving equations, a process known as bitcoin mining that was designed to reward participants with bitcoins roughly every 10 minutes. That controls supply and provides security. However, as more people put computers to work to solve the equations, the problems become harder to crack. This has led miners to apply more processing power to the problem, which will presumably require an ever-growing amount of energy.

This is a theme that media outlets such as Bloomberg News, CBS, CNN — as well as CNBC — and others have echoed in articles citing the Digiconomist data. It has also been cited in research reports and financial newsletters and by closely-followed investors like Stanley Druckenmiller in an interview on CNBC last week. But we are learning now that this energy-gobbling forecast, which has also been cited in bearish cases about bitcoin, may be flawed and making an extreme extrapolation assumption seen in the past when new technologies emerge.

Bitcoin mining is now being done at dedicated data centers that have sprouted up from Iceland to Inner Mongolia, where electricity prices are cheap. Much of the mining takes place in China, which generates most of its electric power from coal, prompting warnings that bitcoin threatens to wreck the environment and supersize the world's carbon footprint.Several energy experts caution that there is currently no reliable, verifiable way to measure just how much electric power is consumed in the process of minting the cryptocurrency. They say the first step is gathering hard data from the data centers, and no one has done that work yet.

"Many of those calculations that you see today I think are based on very weak assumptions," said Christian Catalini, an assistant professor at the MIT Sloan School of Management who studies blockchain technology and cryptocurrencies. "I don't think anybody can make a credible claim about the current" electric power use for bitcoin mining "without actually having data from the miners." In the absence of hard data, the market is turning to other sources to comprehend bitcoin's impacts on global energy demand.

Just this week, Nomura speculated that bitcoin could start influencing energy markets in 2018. "So perhaps the grey swan of next year is not Bitcoin's bubble bursting, as so many commentators tend to suggest, but instead it's [sic] continued rise and a surging demand for coal," Nomura analyst Jordan Rochester wrote. Nomura noted that power used to mine bitcoin is estimated at 33.2 terawatt hours. That matches the figure published a few days earlier on the Bitcoin Energy Consumption Index, which is updated daily on the cryptocurrency website Digiconomist.

Digiconomist's index has emerged as something of an authority recently. The index was developed by Alex de Vries, a 28-year-old consultant for PwC with a background in data and risk analysis who now specializes in blockchain, the technology that underpins bitcoin. He founded Digiconomist as a hobby in 2014, and acknowledges he has no previous experience in energy economics. According to the index, the amount of energy consumed by mining bitcoin surged about 26 percent in November alone and now totals nearly 36 terawatt hours, enough energy to power about 3.3 million homes. Digiconomist notes this would make bitcoin the 59th biggest energy consumer if it were a country.

Koomey, the Stanford University lecturer, says there are a lot of assumptions baked into the Digiconomist model. But he also claims it is fundamentally flawed because it backs into bitcoin's power consumption by estimating miners' revenues and expenses. "Any time you do that, you introduce multiple layers of error and uncertainty," he told CNBC. "It's a completely unreliable way to do the analysis, and no credible energy analyst would ever do that."

De Vries stands by his figures. Given what we know about bitcoin mining, he says it is fairly easy to determine the lower bounds of its energy usage. If all bitcoin mining were done on the fastest machines in optimal conditions, he says it would still consume 13 to 14 terawatt hours. But since not all mining is done under these conditions, his estimate is "plausible" he said. "I'm obviously confident in this number. I wouldn't be publishing it if I wasn't confident," he told CNBC. "Although in the end there's no way to verify my numbers because it's like a black box. You don't know what's in there," he said.

Jens Malmodin, a senior specialist in sustainability at Ericsson Research, is also skeptical of the Digiconomist estimate. For him, one red flag is that it implies bitcoin mining consumes roughly double the combined annual electricity usage of Google, Amazon, Microsoft, Facebook and Apple in recent years. "I think we need more correct figures," said Malmodin, who has created estimates of energy consumption and carbon emissions in the information and communications technology industry since 2005. "This is wrong and an unrealistic figure."

Harald Vranken, an associate professor at Radboud University in Netherlands, has also researched bitcoin's energy use and estimates it now consumes 1-4 gigawatts. That correlates to Digiconomist's figure, Vranken said, but only at the upper range of his estimate. "Given the large rise of Bitcoin's exchange rate, and the difference in electricity prices, it is hard to make an accurate estimate," he told CNBC in an email.

The integrity of electric power forecasts is a subject close to Koomey's heart. He was part of the team in the mid-1990s that debunked widely circulated projections of power consumption by the Internet. Those studies overstated the Internet's share of U.S. electricity consumption by at least a factor of eight, and projected it would double in 10 years.

"It turned out to be a bunch of nonsense, but it takes pages and pages of work to debunk an errant sentence," Koomey said. Now, Koomey sees the same pattern emerging as Digiconomist's data and other estimates weave their way into research reports and news articles, sowing the type of faulty conventional wisdom that could mislead investors. Take for example the prediction that bitcoin mining's energy usage will match U.S. power consumption in 2019 — and the world's total appetite by 2020 — if it continues to grow at its current pace. That analysis is based on Digiconomist's estimate and appears to have originated in a recent fact sheet by Power Compare, a British website that offers electricity information. Power Compare could not immediately be reached for comment.

According to Koomey, this kind of analysis makes a classic mistake: It projects high growth rates associated with a new technology into the future, resulting in an eye-popping demand forecast. Similar projections were made about Internet data traffic and electricity usage from office computers and mobile devices, he notes. Sure enough, their initial growth rates moderated as they scaled up.

De Vries also said the Power Compare forecast based on his estimate is unrealistic. Still, in the following weeks, the analysis spread quickly. It was featured in a Grist article earlier this month titled "Bitcoin could cost us our clean-energy future" and a week later in a Newsweek story headlined "Bitcoin mining on track to consume all of the world's energy by 2020." Also last week, financial newsletter The Bear Traps Report cited the analysis speculating that GE's turbine business could benefit as China switches from coal-fired to natural gas generation in part to support cleaner-burning bitcoin mining. However, the financial newsletter did call it an "extreme" case.

Stanley Druckenmiller told CNBC last week he doesn't own bitcoin and only trades what he knows, adding, "What I do know is it takes the same amount of energy to do one Bitcoin transaction that it takes to power nine homes in the U.S. By 2019 it'll take up half the energy in the United States to run the bitcoin network."The statistic comparing energy usage by U.S. homes and Bitcoin mining also comes from Digiconomist. The other reports also relied heavily on Digiconomist data on top of the Power Compare analysis.

It's not yet clear what will rein in bitcoin's growing energy usage. Researchers say it could be the rise of cryptocurrencies with mining protocols that require less energy, a crash in bitcoin prices, continued efficiency gains as bitcoin scales up or a combination of these and other developments. Even if the Digiconomist figures are correct, Koomey notes that power consumption from bitcoin mining would only amount to a fraction of 1 percent of global demand. He and others caution against making leaps about bitcoin's impact on the power sector until verifiable data are available. "Companies who make big investment decisions based on numbers that are highly uncertain are almost always going to get burned. It's just a mistake to jump to conclusions," Koomey said.