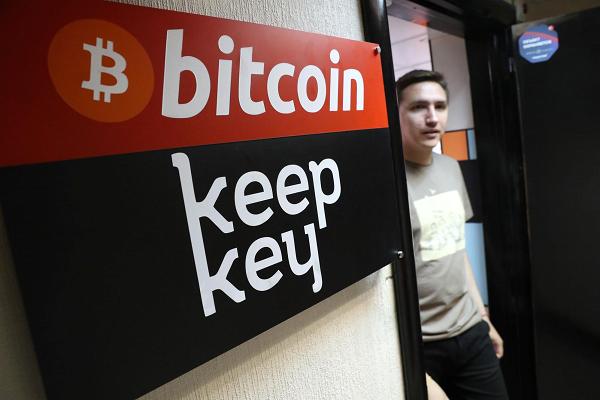 After the bitcoin craze rose to a near-fever pitch

in the last several weeks of 2017, several investors and analysts in the space see more growing pains for cryptocurrencies this year. Here are these predictions for digital currencies,
based on those interviews:

More institutions will get into cryptocurrencies.

"Our institutional investor base is very interested in learning more and getting exposure," said Michael Graham, a Canaccord Genuity analyst who has published several reports on digital currencies. "One of our major themes is that as we roll out through 2018, it's the year of institutions getting exposure to the space." The number of institutional-level investment products related to bitcoin is increasing.

In addition to the CME and Cboe bitcoin futures that launched in December, Cantor Fitzgerald and Nasdaq are planning their own derivatives products. Analysts also expect regulators will approve a bitcoin exchange-traded fund in the second half of this year, or in early 2019. "With the regulated futures markets going live in 2017, the stage is set for ETFs to gain approval in 2018," Nolan Bauerle, director of research at CoinDesk, said in an email. "In fact, the Cboe filed for 6 cryptocurrency ETFs at the end of 2017 which could go live in 2018. This would dramatically increase how institutional investors can get exposure." The U.S. Securities and Exchange Commission declined to comment.

There will be more regulation and bitcoin's price will drop.

However, in the meantime, regulators will likely try to limit speculation in cryptocurrencies. In the last several months, the SEC has become increasingly vocal in warning investors about the risks of cryptocurrencies. The commission also has suspended trading in some companies due to concerns about their claims regarding their token-related announcements. "One of the things we'll see [is] enforcement here from the regulators," Canaccord's Graham said. He expects that greater regulation will cause a "major price dislocation event for the whole sector."

Bitcoin has soared more than 1,500 percent to near $16,200 over the last 12 months. But it is still down about 18 percent from its all-time high above $19,800 hit in mid-December. Meanwhile, smaller cryptocurrencies have surged hundreds of percent in the last several weeks, bringing the total market value of all digital coins to above $770 billion, according to CoinMarketCap. Action by regulators could halt those gains. Bitcoin fell more than $2,000 in September when China cracked down on digital currencies. Spencer Bogart, managing director and head of research at venture capital firm Blockchain Capital, expects that many cryptofunds will not be prepared to handle a monthly decline of 25 percent.

"I think we could easily purge 60-75% of crypto hedge funds in this type of market," Bogart said in an email. "In this environment, funds that can call capital and deploy it counter-cyclically stand to benefit significantly." More than 120 such funds opened in 2017 for a total of 175 funds, according to financial research firm Autonomous Next. In contrast to Bogart, Autonomous' global director of fintech strategy, Lex Sokolin, predicts the total number of cryptofunds will nearly triple to 500 this year. But he said the focus will be less on the number of funds and more on assets under management, which he expects to reach $20 billion.

It will be a wild, volatile ride.

The contrasting views on the future of cryptofunds come as some analysts expect bitcoin to ride an even wilder wave this year. Ari Paul, chief investment officer of cryptocurrency investment firm BlockTower Capital, predicts that bitcoin will trade at both $4,000 and $30,000 at some point in 2018. One reason some analysts say bitcoin will ultimately rise further is that investors will bet on a payout from more splits in the digital currency. When some bitcoin developers decide to implement their own upgrade of the bitcoin network, bitcoin investors at the time of the split receive equal amounts of the split-off coin.

Aug. 1's split of bitcoin into bitcoin and bitcoin cash was "a change in the trend," said Ramon Quesada, a vocal member of Spain's cryptocurrency community. Developers "are using the brand bitcoin and they are splitting the main chain. They are making a fork. You create a new chain and you give a new name to this chain." Bitcoin trades near $16,200, while bitcoin cash trades around $2,600. "We think we're going to have more forks in 2018 than 2017," Canaccord's Graham said. "Ultimately we think those forks are going to be a short-term tail wind to bitcoin's value and a long-term headwind"  Bitcoin still faces many challenges, such as improving transaction fees and speed.

Bitcoin will prevail, while other cryptocurrencies grow.

While bitcoin's price has stagnated in the last two weeks, smaller digital currencies such as ripple, stellar and tron have surged into the ranks of the largest cryptocurrencies by market capitalization. Erik Voorhees, CEO of digital asset exchange ShapeShift, said that in contrast to bitcoin's dominance on the platform a year ago, about half of transactions on the platform now don't involve the popular digital currency at all. However, bitcoin should still benefit from the increased interest in the "alt-coins." Analysts also point out that since bitcoin is the most established digital currency, it is often the way new investors access the cryptocurrency space. "Bitcoin has such magnificent network effects that I don't see another alt-coin that's a little better at payments" or some other function right now, Autonomous' Sokolin said. "One of the top 10 will collapse."

Stock investors may get a chance to invest in a digital currency-related IPO.

As interest in digital currencies has grown, the companies involved with the business have become billion-dollar entities. Leading U.S. cryptocurrency marketplace Coinbase, valued at $1.6 billion, has indicated it could pursue an initial public offering.

"I do think the public is going to see some crypto-owned IPOs this year and more broadly blockchain IPOs," Canaccord's Graham said. He said cryptocurrency-related companies that want to give U.S. regulators a better impression are likely "going to rely on old-fashioned equity."But just as greater regulation in the U.S. has encouraged more blockchain development outside the country, the first crypto-related public offering may not happen in America either.

"IPOs are going to happen outside the U.S. first," said Ryan Gilbert, partner at Propel VC, which focuses on financial technology and has a $250 million fund. Propel is indirectly a minority investor in Coinbase, Gilbert said. Regardless, investors will need to be extremely cautious about companies making announcements related to cryptocurrencies and adding "blockchain" to their name. Some tiny stocks have soared on such changes, prompting regulators to issue warnings about potential scams. The market moves mirror the tech bubble, when many stocks saw a dramatic price surge after adding "dot-com" to their names.

A paper published in 2000 through Purdue University found the dot-com name changes began around June 1998 and picked up in the first five months of 1999, at an average rate of seven name changes a month. Most of the companies were traded over the counter, and regardless of their level of involvement with the internet, the name change resulted in returns of about 74 percent for the 10 days surrounding the announcement day, the paper said.

"What the dot-com paper shows is that reasoning goes away when you're looking at a hot industry," co-author Raghavendra Rau told CNBC in a phone interview this week. He is now a professor of finance at the University of Cambridge. If he had to guess, Rau said it may take at least two or three years for the blockchain stock mania to subside. "My personal sense is the technology is good, but like every new technology I don't think the broad pattern [of] history changes very much. There will be manias."