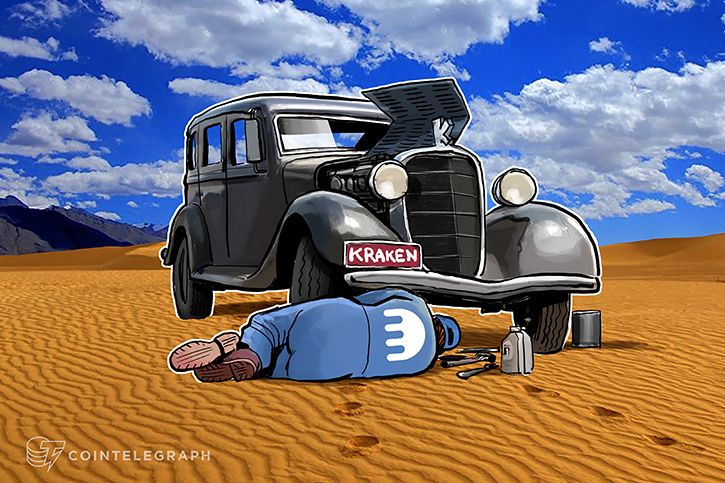 after the site initiated a system upgrade. Kraken engineers had estimated the downtime would only be two hours. Much like Gilligan’s three-hour cruise that went horribly wrong, Kraken users all over the Internet are raging over the downtime and asking difficult questions.

Nearly all digital currency exchanges have faced significant growing pains in the last year, as the interest in cryptocurrencies has grown exponentially. Coinbase and Bitstamp have been overwhelmed with user traffic, leading to delays. Bitfinex has been hit by DDOS attacks and recently had to stop registration for new users because of overwhelming demand. Binance and Bittrex have also halted new user signups.

Still, Kraken has arguably suffered the most problems of all major exchanges. Users, including myself, have experienced multiple connection errors and extraordinary difficulties placing and cancelling orders. It’s sometimes necessary to refresh Kraken’s page 10-15 times before being able to execute an action. Numerous users have complained that Kraken posted their orders multiple times (after telling them their order failed initially), in some cases costing them thousands of dollars.

Upgrade to fix it all?

While many have encouraged users of Kraken to go elsewhere, it’s not always that easy. US users are particularly limited in the exchanges they can use, particularly with Bitfinex ditching them earlier last year. For certain altcoins, US traders may only be able to use Kraken to trade them against fiat. Likewise, Kraken is one of the only markets where US residents can long or short Bitcoin. Such users were delighted when, on December 15, Kraken announced a major upgrade to fix the site’s

“Kraken.com performance is extremely degraded and unreliable.  Clients can expect severe latency and difficulty interacting with all web and API services.  Requests will frequently timeout and fail.  At the moment, the only solution is to wait and try again later.

Next week we will be rolling out a major systems upgrade which should resolve these scaling and load issues.  The upgrade is long overdue and has been substantially delayed by the diversion of resources toward the protracted fire fighting effort required to deal with the last several months of unrelenting growth.”

The upgrade scheduled for the third week of December was rescheduled twice, before finally commencing January 10 at 9 PM PST. The status page Kraken set up for the
upgrade stated:

“We are performing a system upgrade on Thursday, January 11 at approximately 5:00 UTC (Wednesday January 10 at 9 pm PT). Kraken services will be offline for about 2 hours during the upgrade, possibly longer.”

Over the next two days, Kraken has continued to update the status page, complaining of late starts and the upgrade progressing more slowly than expected. Finally, they announced that the upgrade was in its final stages, before then posting that “a number of issues” came up in their “final testing.” Kraken is not clear on why this “final testing” was apparently done on production servers. About one day after the two hour upgrade began,

“We are making progress on the few remaining issues but don't have a definite launch time yet. We intend to cancel stale (and possibly all) orders and pause liquidations upon resuming service. More details to follow soon. Thank you for your patience.”

It’s unclear exactly how this will work. The price of Bitcoin and altcoins has of course changed over the last two days, and nobody is quite sure how Kraken will keep people from losing money on long and short positions that might have been closed had the exchange been working properly. Most astonishing of all, about 36 hours after the upgrade began, Kraken apparently sent their engineers home to take a nap!

“We are close but rather than launch immediately ahead of the team passing out, we will push off a bit to get some rest and be able to better monitor systems and react to problems following launch. Unfortunately, this means several more hours of delay.”

At press time, Kraken is still down with no ETA for resumption of trading, and the exchange has not responded to our requests for comment.