Skip to content
Cryptocurrency Developments to Look Forward to in 2019

2018 has been an eventful year in the crypto industry.

The market experienced a severe price correction to the extent that some are beginning to doubt the future blockchain promises. Still, in spite of all the losses and FUD, the fundamentals continue to grow, and 2019 is promising to be an exciting year in terms of project development as well as cryptocurrencies edging toward the mainstream.

One example of this is the U.S. state of Ohio accepting tax payments in Bitcoin. Merchants accepting cryptocurrencies as payments have also grown in number, with several people testifying on social media how they paid for goods and services with cryptocurrencies such as BTC, ETH, and BNB. Notable merchants that accept Bitcoin include Overstock, eGifter, Expedia, Shopify, and others. Another metric that expresses the growth of the industry is the amount of talent that has been attracted to blockchain. Research carried out by Glassdoor reveals a 300% rise in blockchain-related job openings in 2018 (as opposed to 2017).

This metric defies the downtrend in Bitcoin price, as can be seen in the chart below: 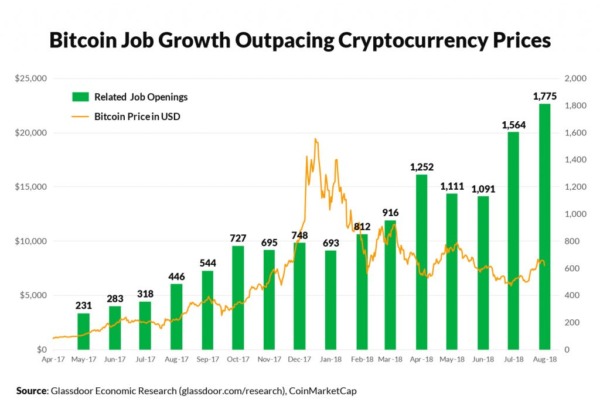 Despite the heavy price downtrend of 2018,

many would still agree with investor Anthony Pompliano that Bitcoin is the best-performing asset of the decade. This matters for long-term crypto investors as they look beyond the immediate state of the industry to the impact it will have on the future world economy. As 2018 draws to a close, it’s time to look forward to what 2019 has in store, in terms of growth and development for the industry.

The Launch of Financial Products on the Stock Market in 2019

2018 was filled with rumors of institutional investors buying into cryptocurrencies, especially Bitcoin. This has not brought about the uptrend in valuation that many expected to accompany it. Several times, the Bitcoin ETF proposal was rejected in 2018. But the sentiment is beginning to change, as a SEC commissioner has stated a Bitcoin ETF is “definitely possible.”

In 2019, some fresh momentum in crypto gaining acceptance in the traditional finance world is expected. Nasdaq is reportedly working with the US Commodity Futures Trading Commission (CFTC) to launch Bitcoin futures in Q1 2019, and the report has just recently been confirmed. Also, Bakkt Bitcoin Futures is scheduled to launch in January 2019, after being pushed back from their original launch date of December 12, 2018.

Developments to Expect From Crypto Projects in 2019

Since its release in 2015, the Ethereum blockchain already has so many dapps and games on its network that concerns about scaling have been raised. Ethereum boasts over 2,000 dapps on its platform, and developers have been hard-pressed to create a solution to its scalability issues. Even smart contract functionality must be constantly upgraded, as the blockchain industry keeps evolving. Ethereum’s next upgrade is coming up in January 2019. The update, named Constantinpole, is designed to improve the efficiency of the blockchain, reduce block reward for miners, and make the blockchain more ASIC-resistant. Much later in 2019,

Ethereum plans to have a second upgrade, which will include implementation of the Casper protocol and sharding. Casper will move Ethereum from a Proof-of-Work (PoW) protocol to a Proof-of-Stake (PoS). PoS solves the problem of large mining operations having too much power over the course of the blockchain. Sharding will enable the Ethereum blockchain to attain higher transaction speeds by partitioning network resources such that a single node doesn’t have to process every transaction in the blockchain history to make a new transaction.

Litecoin is solidifying its status as the silver to Bitcoin’s gold. With Bitcoin becoming a store of value, people might be reluctant to use it in everyday transactions, preferring instead to store it. Litecoin is an alternative created to enable everyday payments. The Litecoin Foundation already has a campaign that encourages this, paywithlitecoin.co, which basically showcases the benefits of paying with LTC, such as high-speed transactions and low fees. LTC fees are expected to go much lower with the release of Litecoin Core 0.17. This update was announced in October 2018, and will likely be released early in 2019. However, it is unlikely that the Lightning Network becomes a fully functional product in 2019, although significant development is expected to be completed on it. Also, Litecoin is looking towards enabling more anonymous transactions on its blockchain to increase fungibility. This was hinted by Litecoin Founder Charlie Lee on the popular crypto TV show, Magical Crypto Friends, and could be among Litecoin’s priorities for 2019.

Cardano is expected to release the features of the Shelley phase in 2019, starting with delegation and stake pool testnets. Shelley is the phase in the development of Cardano aimed to make the project fully decentralized and autonomous. Also, Cardano is expected to deliver on advanced smart contract capabilities suitable for enterprise usage, especially with reference to transaction speed.

TRON launched its mainnet on June 25, 2018, and has been growing ever since. Recently, Tron surpassed Ethereum in dapps usage, as well as in the number and volume of transactions put through these dapps. In a recent interview, Justin Sun, CEO of the Tron Foundation, says that Tron will adopt zk-SNARKS into the network. Expected to take place in Q1 2019, this means the transfer TRX tokens can be anonymous and private to a larger extent. Also worth mentioning is the acquisition of BitTorrent by Tron in July 2018, which is a move to foster the mainstream adoption of Tron. Tron will use its network to build BitTorrent more efficiently in 2019, a development known as Project Atlas.

The completed, current, and upcoming stages of the development can be seen on the roadmap below:

Hyperledger is an open-source, non-profit, and independent smart contract platform originally launched by The Linux Foundation. Hyperledger is focused on building a platform suitable for large organizations, such as IBM and Intel, interested in blockchain and smart contracts.  On October 1, 2018, Hyperledger announced a partnership with Enterprise Ethereum Alliance (EEA), each becoming an associate member in the other’s organization. This is expected to trigger a collaboration in 2019, which would likely result in the interoperability of the Hyperledger and Ethereum blockchains.

Qtum is a notable dapps platform with a Proof-of-Stake (PoS) system of verification. The mainnet was launched in September 2017, and a number of developments have already taken place on the platform. Qtum plans to launch its enterprise version QtumX in Q1 2019. In Q2 2019, Qtum is expected to release its first public testnet with x86 smart contracts, and mainnet integration of the x86 Virtual Machine is scheduled for Q4 2019. Qtum also plans to introduce Lightning Network in 2019. This will help the blockchain platform scale and achieve faster transaction speeds. The plan is to have a public testnet of the Qtum lightning network in Q2.

Zilliqa is a blockchain platform for hosting decentralized applications similar to Ethereum. The notable advantage Zilliqa offers is a transaction speed many times what Ethereum currently offers. According to the website, the platform is able to do as many as 2,828 transactions per second. The mainnet launch of Zilliqa was previously scheduled for Q3 2018. However, it was rescheduled due to concerns about the readiness of the code.  January 2019 has been announced timeframe for the Zilliqa mainnet launch.

Other Upcoming Crypto-Related Products and Services in 2019

IOTA and Volkswagen have scheduled the launch of a digital car pass for Q1 2019. This would be the first working product for IOTA. This is expected to be the first of many, as IOTA already has partnerships with other companies with whom they have plans to create products with their Tangle technology. Recently, Coinbase began offering an over-the-counter (OTC) trading desk for institutions to get crypto exposure. Binance has also started testing a fiat-to-crypto exchange in Singapore. The full launch will be expected in 2019, with many more exchanges and trading tools also in line to get introduced into the crypto market.

The crypto industry has shown great resilience in 2018 despite the bear market. Throughout 2018, the industry was haunted by regulatory rumors that contributed to FUD regarding the future of crypto. Now that there is a glimpse of what regulations will look like for the industry, the focus will be back on efficiency (through development) and adoption (through marketing efforts) in the new year. The impact these developments will have on the valuation of cryptocurrencies is yet uncertain. While there are arguments for a bull run, the short sellers may still impact the market for a more prolonged period of time.

In spite of all that has happened, there are a lot of things to look forward to in 2019 — the above are only a selection of some of the developments we can look forward to in the new year. 2019 will definitely not be like 2018, nor will it be like 2017. What the year will turn out to be lies in the hands of the developers, business managers, marketers, and various stakeholders in the industry’s ecosystem.